This week we are looking at the colour red.  I set out our interest table with the fire engines in red which I have already used and know the boys in particular enjoy.  The girls like it when I add the small figures too.

We walked to nursery and spotted everything that was red on the way.  Before we even started we noticed that P was wearing a red gilet and that the hood of our buggy is red.  H's bag hanging on the buggy had red straps on it too. 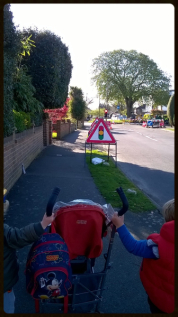 We also spotted some road works.  The warning triangle had a red outline on it and three round coloured circles, red, yellow and green and while we waited there the traffic light turned red.  We also spotted the red tree on the left hand side behind the wall.

There were also red barriers blocking off areas in the road where holes had been dug and we talked about the fact that red often means we need to be careful or stop. 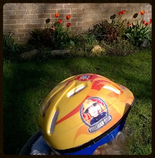 Next we spotted some red tulips growing against a wall.  H said "red and yellow and orange".  As it's spring there were lots of lovely flowers to spot on the walk both growing in flower beds, on trees and in cracks along the path. 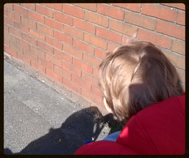 We came to a huge ginormous wall made from red bricks.  P said "there are hundreds, thousand bricks there

A little later we saw an awesome red post van parked in front of a red post box.  We went over and had a look at the van and talked about the crown on the logo which led to a conversation about the Queen and her upcoming 90th birthday.  We also had a look at the post box further along the road and noticed a red box stuck to the side of it.  The post man came along so we asked him what it was for and he said that there are lots of bags of post in the box and the post man unlocks it with a special key, takes out one bag and delivers all the letters in that bag to the people's houses.  Then he comes back, puts the empty bag in the box and takes out the next bag and delivers those letters.  The boys were intrigued and we ended up coming home and writing letters, putting them in envelops and posting them in various shoe boxes and through doors around the house and garden. 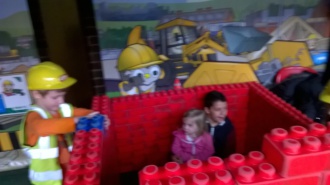 We visited the Discovery Outlook Centre and built a house out of red squashy bricks.  The children dressed up as builders in their hard hats and high visibility vests and used the big red building bricks to design a house shape.  They collected these red bricks from all around the building area in wheelbarrows, on trucks and by hand and slotted them all together until we could sit inside.

The children dressed up in red outfits.  We had Minnie Mouse, a fairy, a racing car driver and a princess.  We talked about pink being nearly like red and that if you add white to red it makes pink. 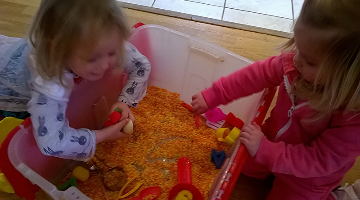 We made a red and yellow sensory box.  We coloured rice red and yellow.  See how I colour rice here The Very Hungry Caterpillar.  We began with red rice in a yellow bowl and yellow rice in a red bowl.  I said to the children "oh dear, the red rice has got into the wrong bowl, how can we get it into the correct bowl?"  I put two pieces of cardboard onto the floor next to the sensory box, one yellow and one red.  I offered the children teaspoons, dessert spoons, scoops, cups and pincers.  They began to pick up the red rice from the yellow bowl using teaspoons but then decided that they couldn't put it into the red bowl because the yellow rice was already in there.  So they painstakingly moved the yellow rice onto the yellow card on the floor and then D said "we can pick the yellow bowl up and tip the red rice into the red bowl" and she did it.  The play became spontaneous after that, rice went everywhere and the conversations were great.  They found new ways to do things, experimented and tested theories and helped to sweep the rice into piles.  As you can imagine the rice all ended up in the big sensory box mixed together making a lovely orange colour. 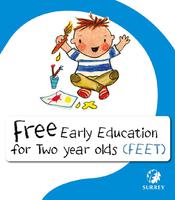 I am registered to provide FEET